Dr. Martin Luther King, Jr. allowed his children to watch Star Trek because of the show’s historic portrayal of Lt. Nyota Uhura – a dynamic translator and communications officer on the USS Enterprise. Lt. Uhura showed a future in which Black communities were equal not only aboard space fleets, but across worlds and galaxies.

Similar to Star Trek, AI for the People uses art, film and culture to imagine a world in which artificial intelligence can work FOR the people – not AGAINST.

Our goal is to work with Black lawmakers to make sure the tech sector is regulated through a racial justice lens.

Mutale Nkonde was part of a team that introduced the 2019 Algorithmic Accountability Act.

The Congressional Black Caucus publicly warned activists about the organizers of the disinformation campaign.

Our goal is to create educational content that informs Black journalists about how social media platforms become delivery systems for mis-and disinformation.

We started working with the N.I.C.E network at WHYY. Our goal was to find out how local newsmakers used social media in their reporting practices.

Our goal is to produce content to shape how large white-led institutions discuss tech.

We won a New York Emmy for a news segment we co-produced with NTV on facial recognition and shareholder activism here.

To get an in depth view of how we operate, please download our latest annual report. 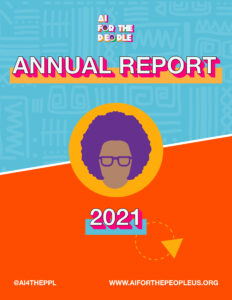 To view our 990s, please click the link to Non Profit Navigator here.